TIDEL II trial: uncovering the predictive value of ABCB1 in determining the long-term response to imatinib in CML patients

Adelaide researchers based at the South Australian Health and Medical Research Institute (SAHMRI) have demonstrated the significance of early increases in the expression of ATP binding cassette subfamily B member 1 (ABCB1) in predicting long-term response to imatinib therapy.

The investigations were recently published in the journal Leukemia and provide the first evidence that monitoring changes in drug-transporter expression may be used to inform patient treatment.[1] In this guest blog, lead researcher Dr Laura Eadie describes the results of the study.

ABCB1 (also known as p-glycoprotein or multidrug resistance protein 1) is a membrane transporter known to be involved in the efflux of tyrosine kinase inhibitors (TKIs), including imatinib, nilotinib and dasatinib. Overexpression of ABCB1 has also been demonstrated to cause TKI resistance in vitro. Although previously studied in chronic myeloid leukemia (CML) patients, the predictive value of ABCB1 in determining a patient’s long-term response to imatinib had not been realized until just recently.

Determining the predictive value of ABCB1

For the study, I measured the levels of ABCB1 mRNA in the total white blood cells of patients enrolled to the Therapeutic Intensification in De Novo Leukemia (TIDEL II) trial (ACTRN12607000325404) at two time points specified in the trial protocol; day 1 (prior to the start of imatinib therapy); and day 22 (three weeks on imatinib). We then calculated the fold rise in ABCB1 mRNA expression levels and patients were grouped about the median into high- and low-fold rise. When we compared the molecular outcomes for patients in these two ABCB1 expression groups, significant differences in response to imatinib therapy were observed.

We found that patients with a high-fold rise in ABCB1 mRNA at day 22 were significantly less likely to achieve:

In addition, we found that patients demonstrated increased levels of ABCB1 mRNA before the development of mutations and/or progression to blast crisis. The fold rise in ABCB1 mRNA was not associated with BCR-ABL1IS or imatinib drug levels, two previously defined biomarkers of response to imatinib therapy.

Further assessment of ABCB1 protein levels in day 1 vs day 22 samples suggest that the greater increase in ABCB1 observed in patients who respond poorly to imatinib may have been due to the clonal selection of ABCB1-expressing granulocytes.

There is evidence that indicates nilotinib is also likely to be transported by ABCB1;[2] however, the TIDEL II trial specifies a switch to nilotinib following suboptimal response to imatinib. We assessed the correlation between response to subsequent nilotinib therapy and the ABCB1 mRNA fold rise observed after three weeks of imatinib exposure.

We hope to validate these findings in other trials and are currently investigating whether ABCB1 can be used as a predictive biomarker for CML patients receiving upfront nilotinib therapy.

The assessment of ABCB1 mRNA could serve as an easily transferrable test to predict the likelihood of a patient achieving a deep molecular response. This study could potentially help clinicians in making a therapeutic treatment plan for the patient within the first month of imatinib therapy. Treatment regimens could also be modified pre-emptively and prevent a lack of response to therapy, maximizing the probability of a patient’s long-term survival. 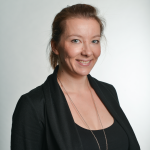 Dr Laura Eadie is an early career postdoctoral researcher in the Cancer Theme at SAHMRI, Adelaide, Australia. She is a current Fulbright scholar and will be based at St. Jude Children’s Research Hospital in Memphis, Tennessee 2016/2017. On her return to Australia, Dr Eadie will use mouse models of leukemia to investigate the effectiveness of treatments and the mechanisms of resistance.