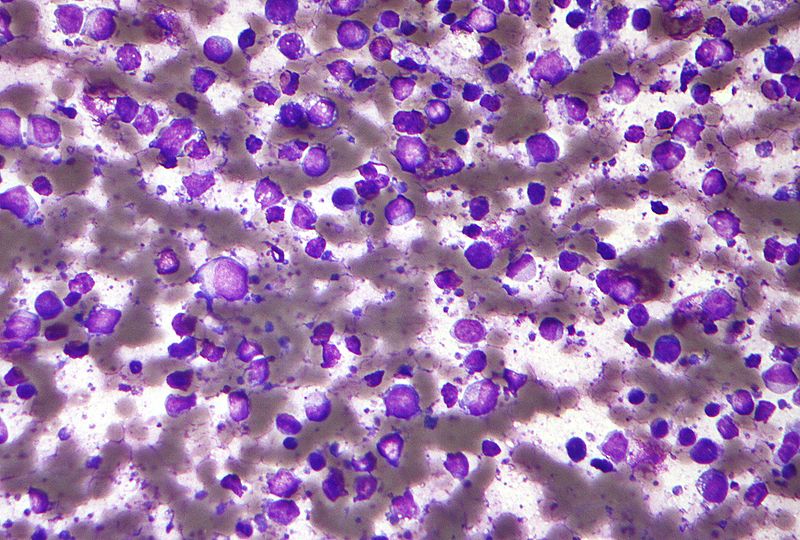 CARD11 is a scaffold protein that is critical for antigen receptor signaling. Normally, it is locked in an “off” position in T- and B-cells until their receptors detect antigens, which causes CARD11 to unlock and connect with other signaling proteins.[1][2]

Mutated CARD11 proteins are found in approximately 10% of cases of the active B-cell-like (ABC) subtype of diffuse large B-cell lymphoma (DLBCL).[3] Of the subtypes of DLBCL, the ABC subtype is associated with the worst prognosis and is characterized by the dysregulation of NF-κB.[2]

The activity of CARD11 is controlled by an autoinhibitory domain, and in patients with the ABC subtype of DLBCL with oncogenic CARD11 mutations, the protein’s autoinhibition is dysregulated.[2]

In the context of immune signaling proteins, autoinhibitory domains “prevent miscommunication with other proteins,” according to Joel Pomerantz, PhD, from Johns Hopkins University School of Medicine, Baltimore, MD.[1]

The DLBCL-associated CARD11 mutations mean that NF-κB signaling is hyperactive in the absence of antigen receptor triggering. This, in turn, means that white blood cells are overproduced.[2]

Dr Pomerantz and his group sought to understand why and how the mechanism put in place to control CARD11, fails.[1]

The expectation was that most of the deletions would keep CARD11 locked and only one or two would unlock it. However, the team found that none of the deletions unlocked the protein, which suggested that there was more than one mechanism at work within the autoinhibitory domain.[1]

To find out what is going on, they deleted the protein’s autoinhibitory domain again and this time, added back one and two regions at a time. This process allowed them to deduce that CARD11 has four different biochemical regions called “repressive elements”, each of which is able to lock the protein on its own.[1] In other words, the four repressive elements cooperatively autoinhibit CARD11 signaling, which means that there is a redundancy in repressive action.[3] CARD11 is the first protein that was found to have multiple elements within its autoinhibitory domain.[1]

This probably explains “why patients with lymphoma don’t have mutations in CARD11’s autoinhibitory domain,” according to Dr Pomerantz.[1]

Instead, the mutations occur in three other regions of CARD11, called CARD, LATCH and coiled-coil regions. Single mutations in any of these regions seem to be responsible for disabling CARD11’s four repressive elements.[1]

In future, the researchers hope to learn more about CARD11’s function and ultimately, the goal is to develop therapies for patients with oncogenic CARD11 mutations.[1]