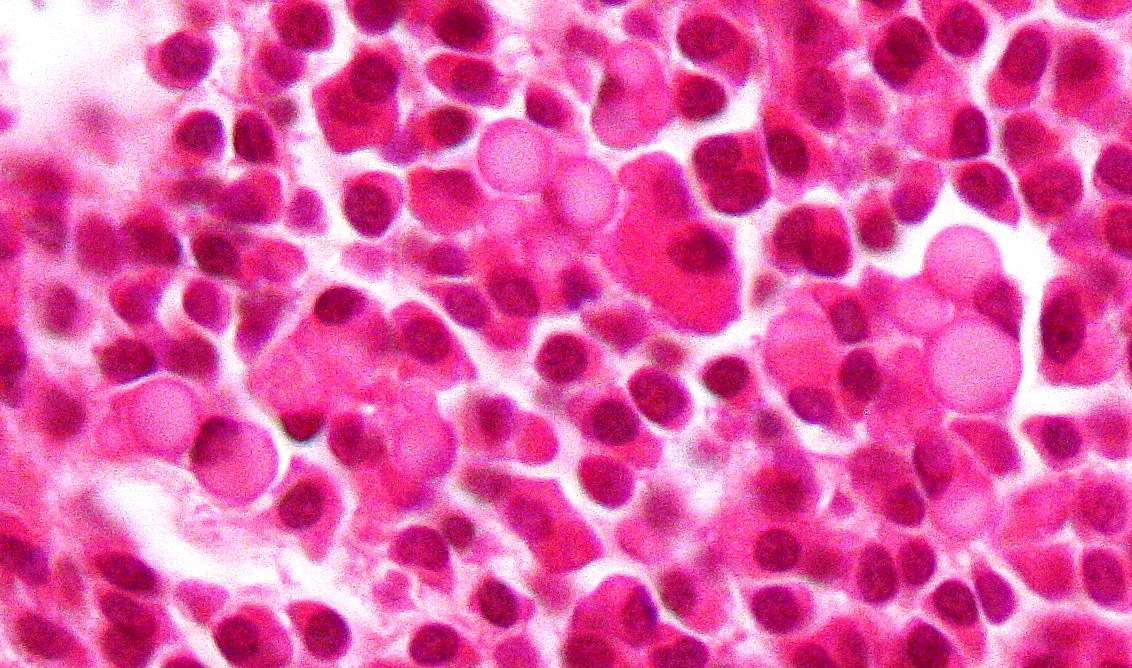 Micrograph of a plasmacytoma by Nephron
Multiple Myeloma Staff Pick

As usual, the ASCO Annual Meeting and the EHA Annual Congress were a hub of activity, data and discussion. We interviewed several experts on the latest news in multiple myeloma (MM) and have summarized the most exciting updates below.

The overall response rate (ORR) was 93% in the DRd arm vs 76% in the Rd arm. The addition of daratumumab also increased the very good partial response (VGPR) and complete remission (CR) rates (76% vs 44% and 43% vs 19%, respectively). Further, the median progression-free survival (PFS) was improved in patients receiving the triplet combination, with a 63% reduction in the risk of progression, compared with those who did not receive daratumumab.[2]

According to Dr Niels van de Donk, “this is the best triplet combination tested so far”. In a video summarizing the results from the POLLUX trial (see below), he also discusses the MAIA clinical trial, which will look at daratumumab in the upfront setting.

“This trial had to be stopped early because of the overwhelming superiority of the triplet combination,” Prof. Keith Stewart from the Mayo Clinic points out in a video summarizing the two trials.

Prof. Philippe Moreau from the University Hospital of Nantes also points out that, down the line, daratumumab may also be used for patients with one or two prior lines of treatment, and patients who are not eligible for stem cell transplantation.

Dr Palumbo explains the results and daratumumab’s mode of action below.

“Arguably, FISH is dead,” according to Prof. Gareth Morgan of the UAMS Myeloma Institute.

Fluorescence in situ hybridization, better known as FISH, is a test used to map and visualize genetic material. FISH can be used to detect genetic abnormalities, which is crucial in MM, as more subtypes are being identified. FISH can be a helpful tool for physicians when selecting the most appropriate treatment, allowing for a personalized approach.

As we move towards precision medicine, “we need tools that identify these groups [of patients]”, as Prof. Gareth Morgan points out. However, FISH is slow, prone to error and expensive. Prof. Morgan argues that in light of next-generation sequencing (NGS), FISH will become obsolete.

The topic of FISH was previously reviewed by Prof. Chng Wee Joo, Prof. Morgan and Prof. Michele Cavo, during a panel discussion on the status of genomics at Myeloma 2016. Experts agree that FISH will be abandoned in favor of NGS in the near future.